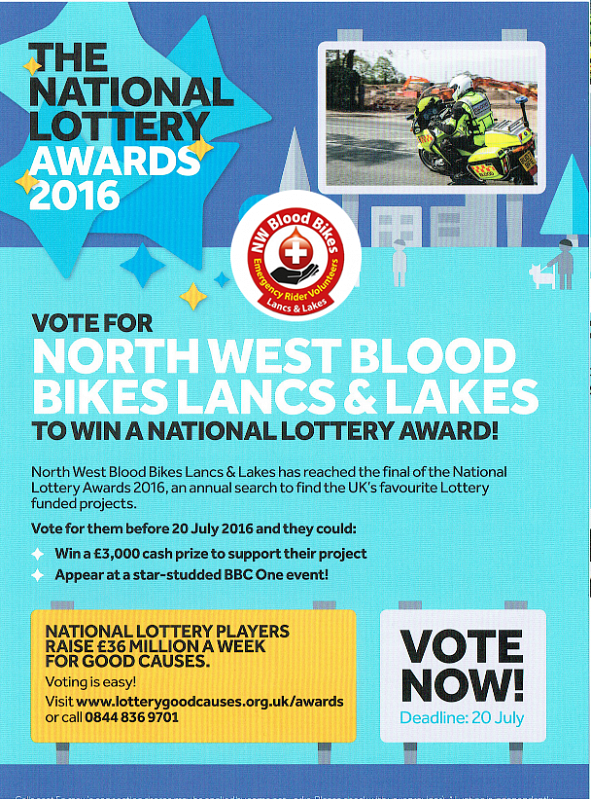 North West Blood Bikes Lancs & Lakes is appealing for local votes as it strives for nationwide acclaim on BBC One in this year’s National Lottery Awards.

The project beat off stiff competition from over 600 organisations to reach the public voting stage in this year’s National Lottery Awards – the annual search for the UK’s favourite Lottery-funded projects.

North West Blood Bikes Lancs & Lakes is competing against six other projects to be crowned the winner of the Health category. Winners of the seven National Lottery Awards categories will each get a £3,000 cash prize to spend on their project, an iconic National Lottery Awards trophy and attend a star-studded glittering Awards ceremony in London, broadcast on BBC One in September hosted by TV star and actor John Barrowman.

The North West Blood Bikes Lancs and Lakes is a voluntary, out–of–hours transport service, working with NHS hospitals and labs in Lancashire and the Lakes. This group of motorcyclists and controllers volunteer their ‘down’ time – evenings, weekends, bank holidays, seven days a week, 365 days a year - to ensure hospitals don’t have to pay for private couriers or taxis out of hours. It is estimated that since being founded in 2012, they have helped save the local NHS trusts around £1 million.

Paul Brooks, Founder, Chairman and Trustee of NWBB Lancs and Lakes, says winning the prestigious National Lottery Award and having their work showcased on national television would be an honour:

“We’re delighted to have reached the finals of The National Lottery Awards. Lottery money has really helped us in buying much needed motorcycles and specialist equipment. It’s easy to vote, so we’re hoping people support us, as it would be a fantastic reward for everyone involved in the project to receive national recognition for their hard work.”

To vote for North West Blood Bikes Lancs & Lakes, please go to www.lotterygoodcauses.org.uk/project/north-west-blood-bikes-lancs-lakes or telephone 0844 836 9701 and follow the campaign on twitter: hashtag #NLAwards. Voting runs for four weeks from 9am on Wednesday 22 June until midnight on Wednesday 20 July.